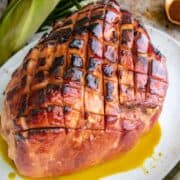 This simple Homemade 3-Ingredient Ham Glaze Recipe is the absolute best and so easy to make! This mustard, brown sugar and orange-juice ham is baked into the ham, then glazed on top, creating the most juicy, delicious, slightly sweet ham.

Ham is popular year-round, but particularly popular as a holiday meal for Christmas and Easter. It also is a perfect quick and easy meat to serve for Sunday dinners.

This would go great with or in our Cheesy Cauliflower Soup or Air Fryer Butternut Squash followed by our delicious and Easy Banoffee Pie. Use the leftover ham to make our Delicious Ham and Potato Soup Crock Pot!

This recipe is for a cooked ham. If beginning with a raw ham, fully cook the ham then follow the steps below, omitting the baking times, but complete the broiling.

1. Preheat oven to 350* F. If ham is spiral cut, skip to step 2. If ham is not spiral cut, make scores in the top of the ham in a diagonal pattern, about ½ inch deep. Place ham in a roasting pan.

2. Whisk together the brown sugar, orange juice and mustard together in a small bowl. Liberally spread glaze across the ham.

3. Place ham in the oven. Since the ham is already cooked, we don't need to cook it, but we want to heat it up and get it to to about 140*F for serving. Bake for 30 minutes then remove and coat in more glaze.

4. Bake an additional 15-45 minutes until it reaches desired serving temperature (around 140*F is recommended by the USDA) then add another coating of glaze. Turn the oven to broil and broil for about 5 minutes. Remove from oven and coat in the final layer of glaze.

Hint: Reapplying the glaze makes it juicy, delicious and flavorful! It's quick and easy to quickly rub on more glaze and makes a big difference!

Store cooked ham in the refrigerator in air tight container for up to 5 days. Reheat pieces in a fry pan til hot or in an air fryer at 360* F for 1 minute per side.

Store cooked ham in the freezer for up to 2 months. Thaw in the refrigerator and reheat as directed above.

This is such a delicious way to make ham, the flavors are baked in and seep in and it tastes amazing. Since there is sugar in the glaze, there is a risk of burning, so watch it while it broils. We like to pull ours out when the tops are almost black, but not quite. 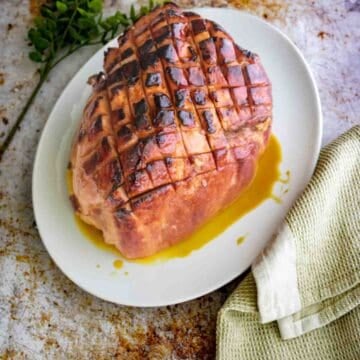 This recipe is for a bone-in cooked ham that weighs about 10 pounds. If using a raw ham, cook until internal temperature reaches 165* F. Then follow the directions, skipping the baking steps.  Store ham in an airtight container in the refrigerator for up to 5 days. Reheat in a fry pan or in the air fryer at 360*F cooking for one minute on each side. We love to use this leftover ham to make our Ham and Potato Soup!

how to make a ham glaze?

For the best and easiest ham glaze, mix together the brown sugar, orange juice and mustard. Baste onto the ham before, during and after cooking for the best flavor and results.