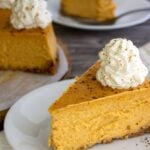 Paula Deen Pumpkin Cheesecake recipe is a true classic! Similar to pumpkin pie, but it's creamy and rich, yet impossibly light, sitting on a cinnamon-y graham cracker crust. Simple and easy to make, it'll be your new go-to Thanksgiving dessert!

We love Paula Deen and wanted to share her recipe with you. We've made the instructions more thorough, but stayed true to her classic recipe which you can find here.

Pumpkin Cheesecake is a delicious dessert through fall and winter, but is especially popular for Thanksgiving and Christmas.

This was inspired by our Paula Deen Pumpkin Bars and Double Layer Pumpkin Pie on this site, and pairs well with our Cranberry Cheesecake and Chocolate Cream Pie.

1. Preheat oven to 350*F. Crush graham crackers using a food processor or rolling pin. Place in a bowl and add the brown sugar and cinnamon. Stir to combine.

2. Add the butter and mix well. Using your fingers, press into the bottom and partway up the sides of a springform pan.

3. Mix together the flour, cinnamon, nutmeg and cloves. In the bowl of stand mixer or using a large mixing bowl and hand mixer: Add one package of cream cheese, the flour mixture and ½ cup of sugar to a bowl. Beat on low speed for 3 minutes.

5. Add 2 of the eggs and beat on medium high speed for about 30 seconds. Add the last egg plus the egg yolk and beat for 30 seconds. Scrape down the edges.

6. Add the pumpkin, vanilla and sour cream and mix just until combined. Pour on top of crust and place in a water bath. We use a large turkey pan and fill it about ½ way up the cheesecake pan. For more instruction see this tutorial.

7. Bake at 350*F for about 70-80 minutes. The edges of the cheesecake will just start to darken and the center should still be wobbly when nudging the pan. Remove from the oven and walk away. Leave it completely alone and let it cool on the counter until at room temperature, about 2-3 hours. Refrigerate at least 4 hours after that. Do not rush the cooling process or it will not set up and the texture will be ruined!

Hint: Spend your time mixing! Don't skip or shorten the mixing time, or the texture will suffer.

Store in the refrigerator for up to 3 days. It will last longer before going bad, but the filling starts to weep into the crust and it doesn't taste as good.

Store fresh pumpkin cheesecake in the freezer in an airtight container for up to 2 months. Defrost in the refrigerator for 2-hours or at room temperature for 1-1 ½ hours. Eat immediately after defrosting. 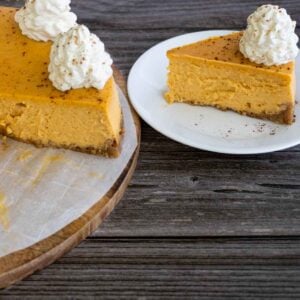