This yummy and easy old-fashioned Apple Dumpling Roll-ups recipe is the beautiful marriage of apple pie and cinnamon rolls. Like grandma's, the dough is a biscuit dough/ pie crust hybrid that is soft and flaky and fluffy. It's filled with a delicious apple filling reminiscent of apple pie, and baked in a sauce that turns into a caramel-y cinnamon-y syrup sauce. They are not soggy, and are absolute perfection. This recipe has been in my family for a lot of decades and was a family favorite growing up. I tweaked a few things and modernized it a bit (butter instead of shortening) and it. is. fabulous. These are also relatively quick to make, since you don't have to wait for the dough to rise.

These are so warm and comforting, we eat them not only during fall season, but throughout winter too. For another fun fall treat, try our Fall Maple Cookies!

Have a lot of apples to use up? Try our Caramel Apple Pie and Easy Homemade Apple Muffins.

What I love about this recipe:

The texture is absolute perfection. The little biscuits are so moist and fluffy. The apple isn't too strong or overwhelming in this dish, and pairs perfectly with the cinnamon caramel syrup. Like, apple pie, it's perfect served with ice cream.

1. Preheat oven to 350*F. On low heat in a small saucepan, combine the water, butter, sugar, and cinnamon into a small saucepan. Stir it a couple of times, then walk away. In a bowl, whisk together the flour, salt and baking powder. Cut in the cold butter. You can use a pastry blender, a fork, or your fingers. Press the butter into the flour until it looks like the picture above. Crumbly, without any remaining butter chunks.

2. Add the milk, reserving a small amount (about a teaspoon or 2). Use a fork and a folding motion to mix the dough. DO NOT OVER MIX. Lift from the bottom of turn the dough over to mix. If it's a little dry, add the rest of the milk. It is easier to add more milk without over mixing than it is to add more flour. Stir the syrup mixture. If it's all melted and combined, turn the unit as low as it can go.

3. Peel and grate apples (our favorites are granny smith due to their tart flavor. Honeycrisp also taste great). On a clean, flat work space, liberally sprinkle flour across it, then roll out the dough into a rectangle, about ⅛" thick. Spread the grated apples across the dough, then sprinkles liberally with cinnamon sugar mixture (you may have a little left over).

4. Roll up the dough starting on a long edge. Slice rolls into about 1" thick pieces and spread out evenly in a 9x13 or 11x11 baking dish. Pour the caramel cinnamon syrup over the top. Bake in the oven at 350* F for 35 minutes. The biscuit dough should look cooked and be a light golden brown. The syrup will be sizzling.

Hint: Do not, do not over mix the dough or the biscuits will be tough and chewy instead of light and fluffy.

Store in an airtight container at room temperature for up to 3 days.

We do not recommend freezing this recipe. 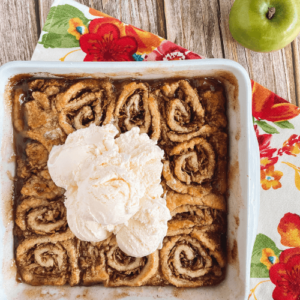 Do not over mix the dough! It will make them tough and chewy. Store in an airtight container for up to 3 days. Serve warm with vanilla ice cream if desired.